When you have a chef originating from Peru such as Bruno Cesar Lerzundi Vagner, the chef of the Bulldog Restaurant, you first wonder when the ceviche, the most popular Peruvian dish, will be offered. Peru is not only known for its exquisite meals, but by the equally delicious desserts. One of the most popular fruits in Peru is lucuma. Unfortunately, it cannot be found in Croatia. However, chef Bruno got himself in search and found a lucuma powder, which was enough to prepare a dessert recently featured at the Bulldog restaurant. It's called "Lucuma mousse on mango ragout with cocoa jelly and lemon jam." WHY IS LUCUMA A DELICACY IN PERU

Lukuma is a fruit that derives from the Andes region of Peru. It has a very specific and sweet aroma. In Peru, it is one of the most popular flavors of ice cream, pudding, and other treats. Due to its taste, lucuma is also used as a natural sweetener.  It is far healthier than sugar and widely used as an aromatic food supplement. Lucuma fruit is characterized by unusually high carotene levels, especially beta carotene which is a powerful antioxidant. It contains 14 minerals, including potassium, sodium, calcium, magnesium, and phosphorus. This combination is good for the bones and teeth health. Thanks to the sweet taste whose glycemic index is lower than sugar, it makes it a convenient food for those trying to regulate their blood sugar levels. In South America, lucuma is being used as a medicinal herb for centuries, and scientific research has confirmed that it has a skin healing effect. Here, the lucuma is available in the form of an organic lucuma powder. Sun-dried and powdered dried fruits completely retain the specific taste of this plant and, most importantly, all the nutrients and useful substances that it contains originally. 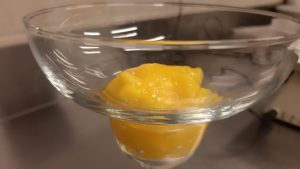 HOW IS THE LUCUMA MOUSSE BEING MADE

In making this dessert, chef Bruno is first making a lucuma mousse, which, in addition to powdered lucuma contains eggs whereby the eggplants are being fed into the snow, and the egg yolks are being cooked with steamed sugar. Then the whipped cream mixed with the lucuma powder is being added. The best way to serve this dessert is by using a wide glass. Firstly,  put a mango ragout on the bottom, which is being made by slicing half of the mango fruit on the dices and cooked in a mixture of orange juice and sugar. When mango cubes are cooked, the second half of sliced mango is also added to the hot mixture. On a mango ragout, lucuma mousse with a few cubes of cocoa jelly is being put up. The cocoa jelly is being made by making a ganache cream in which cocoa and agar agar is added. It is a vegan alternative for gelatin, which acts after it is poured into a hot mixture. When the ganache is cooled down and thus gets a solid structure, it is chopped into cubes that we roll into cocoa. In the end, chef Bruno's lemon jam is being added. It is being sliced into thin strips and boiled in the lemon and vanilla sauce. The mixture is being cooked until the juice is reduced or until the mixture becomes firm. The result is a top-notch desert consisting of four elements that are incredibly well-permeated and connected together. It is a light and refreshing dessert that should become a hit in the upcoming hot spring and summer days.