HOW THE OCTOPUS STEW WITH GREEN POLENTA IS MADE

On numerous occasions, Bruno Cesar Lerzundi Wagner, the chef of the Bulldog Restaurant said that simple dishes made up of three ingredients can give you superior results, that is, flavors that drive you to that famous deep sigh of satisfaction at eating. Such is the dish of octopus with a green polenta. One of the most popular meals in Bulldog Restaurant is one of those dishes mentioned by chef Bruno. The ingredients of this dish are easily available while the final result is unprecedented. Octopus is available all year round, and the fact that it's frozen does not influence its quality. Although Bruno does not want to reveal the procedure for the creation of this meal, he agreed to tell the story of an octopus stew with a green polenta.

THE CAPERS ARE THE SECRET INGREDIENT OF THIS STEW

As a rule, chef Bruno's octopus is prepared in two ways. If it is prepared with a salad, it is cooked for four hours in low fire, with a mixture of water, red wine and a bit of added sugar. When preparing for making a stew, the procedure is entirely opposite. He firstly cleans it, then blanche it. Then it is cut into smaller pieces and the standard process of cooking the stew starts. Octopus pieces are cooked for about 45 minutes in a combination of white wine and tomatoes, along with commonly used other ingredients such as onion, garlic, and so on. What Bruno specifically warns about is the amount of salt that is placed in the stew. As a rule, he puts minimal amount of salt in the octopus stew, because it is never known how much the octopus is salty. Therefore, the amount of salt is determined only when the stew is cooked. And yes, one of the secret ingredients in the stew are - capers. 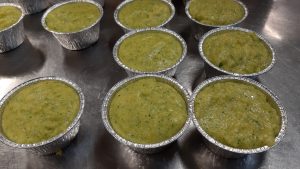 Although polenta is as it is said a traditional dish, chef Bruno likes to give it a different dimension. More precisely, he gives it a different color, the green color, and a different flavor, which is the taste of the arugula, i.e. the arugula emulsion. Chef Bruno greatly appreciates domestic arugula, he considers it far better than Italian and is therefore used in numerous dishes. To achieve this, firstly emulsion is made from the arugula so that the arugula is mixed with olive oil and some spices until pasta is made. In the freshly made polenta, the arugula emulsion is mixed, and butter cubes with a grated Grana Padano cheese are added. While the mixture is still warm, it is placed in molds size as large as you like, or whatever size you can find in the kitchen. When the palette in the mold cools, put it in the hot oven for ten minutes to bake it. 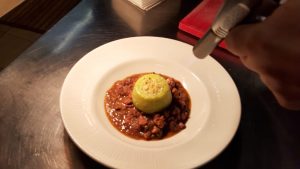 Stew is served in a thick plate, with baked green polenta on top of it, which is additionally served with the grated Grana Padano cheese, and burned with the kitchen torch. For a decoration, put a piece of rosemary and cherry tomatoes on it, and the dish is ready for serving.