IT ALL FALLS INTO PLACE FOR MEAT LOVERS AT BULLDOG

Steak is king, especially if you've ever visited South America, where steak is so popular and widespread that you just need to choose where to eat it - in a classic steakhouse or in one of the fine restaurants. From such Peruvian scope came the Zagreb Bulldog Restaurant chef Bruno Cesar Lerzundi Vagner. As he says, a good steak is sacred in Peru, be it Angus steak, some cattle breeding on the shore, in the mountains or even in Peru's jungle, or if we mention imported steaks. As a result, in Peruvian steakhouse restaurants, a good steak can be eaten at a much lower price than in Croatia, even for less than 100 kunas. That is why the chef Bruno decided to increase the offer of steaks at the Bulldog Restaurant.

TOMAHAWK IS A STEAK, NOT A WEAPON

Chef Bruno wants to highlight tomahawk steak for a start. It is basically a rib-eye steak with a Croatian name "Potplećnjak." The steak of the first rib or fore-rib is favored among many gourmets because due to the fatty center the meat remains beautifully soaked during preparation. To make the presentation as beautiful as possible, the bone or the rib is left to be attached to meat, and that is how it got the name Tomahawk. Tomahawk steak is due to its size served as a dish for two people, and since it is a top-of-the-line piece of meat, the price of 220 kunas in the Bulldog Restaurant is more than acceptable. Chef Bruno got his tomahawk steak from cattle from Slavonia and he serves three types of sauces with it: Barbecue, Peruvian , and Béarnaise. We have already been writing about the chef Bruna barbecue. It is served at Bulldog with some other meat dishes, it is known that it is a family recipe. Chimichurri is a famous meat sauce extremely popular in Argentina and Uruguay, and chef Bruno points out that Peruvian chimichurri is somewhat different because it contains more coriander, onion, and garlic than the Argentine sauce, and it's also spicier. Béarnaise sauce is classic, with butter, yolk and white wine vinegar, seasoned with herbs. 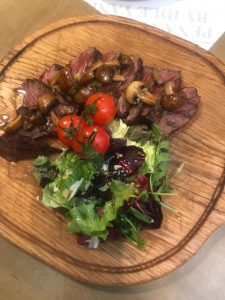 Tagliata di Bavetta is another steak dish offered by Bulldog. Bavetta is a flank steak. It is the back part of the flamas from the side, against the last leg.  In the countries of South America, this part is processed by every butcher, while in Croatia for many years this treatment of meat was obtained only after a particular order. However, in recent years, the situation has changed so Tagliata di Bavetta can now be purchased at the Bulldog Restaurant. As the word tagliata in Italian means "a slice," then it is clear that it is a piece of meat to be served sliced. Chef Bruno is preparing it with butter containing 14 spices.

DRY DEHYDRATION IS RESULTING IN A ROYAL TREAT

The third steak offered is a dry-age ramsteak. Bulldog Restaurant gets it from Meat the King butchers. From 21 to 28 days is the time for the standard dry age of the meat, while 35 or even 42 days of dry aging makes the meat a royal treat. Sufficient recommendation to rush at Bulldog and try a steak prepared in the South American way. The fourth steak is a classic, famous among the homemade gourmands, a mignon fillet that Bruno prepares with a ragout of three types of mushrooms.

When we add that the Bulldog Restaurant will soon be able to offer a black pig burger and a dry-aged burger, it is clear that the meat-eaters will come to their own at a Zagreb downtown restaurant.