Vegetarianism and veganism are not (temporary) trends; this is a way of eating and living, and rarely a serious restaurant can survive on the market without offering some vegetarian or vegan meals. The  Bulldog Restaurant has adapted to it regardless of the Bulldog Restaurant chef's Bruno Cesar Lerzundi Wagner Peruvian culture. According to Chef Bruno, meat and fish dominate not only the Peruvian restaurant offers, but they are the main ingredients in every household. 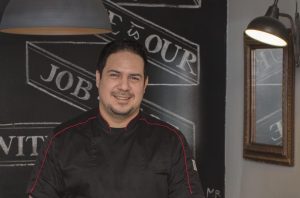 Coming to Croatia, especially for the past ten years, chef Bruno has recognized the importance of vegetarian and vegan dishes in a restaurant. It was not difficult for him to adapt to such restaurant guests, so he announced that the vegetarian Stroganoff would soon be found on the Bulldog menu. It is a meal with Russian-French roots designed by Count Alexander Sergeyevich Stroganoff, an aristocrat born in Paris in the 18th century. As Russian aristocrats appreciated the French chef,  in the case of this meal, French mustard was added to marinated beef, along with the Russian sour cream. Since beef is a primary ingredient, it comes out of the recipe as well as sour cream in a vegetarian/vegan version. Thus the most important ingredient of vegetarian Stroganoff are mushrooms, and chef Bruno uses fresh ceps. Stroganoff can be served with a number of appetizers, most often with pasta or rice, but chef Bruno for this occasion eliminates carbohydrates from the plate and serves meals with zucchinis that he had previously cut into strips and then wrapped with a bit of garlic. 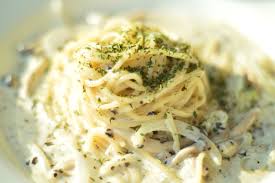 Carbonara can also be prepared without bacon

This meal continues with the tradition of delicious vegetarian/vegan dishes of the Bulldog Restaurant. The regular guests have already enjoyed the vegetarian version of Carbonara, for which the most essential ingredient in the regular version is bacon. In the vegetarian version of bacon, of course, is omitted, and instead, chef Bruno uses ceps, this time dried ones. In addition, he also used almond, soy milk, smoked and sweet peppers, garlic and lime juice, and as he says,  the difference in taste between vegetarian and classic Carbonara was almost imperceptible. Besides, some regular dishes from the Bulldog Restaurant are vegetarian, such as risotto with mushrooms and pasta with Adriatic shrimps. Chef Bruno carefully prepares these dishes, in the case of rhubarb with mushrooms he uses ceps, shiitake and brown button mushrooms, while for pasta with shrimps it is vital that the shrimps are Adriatic and fresh. 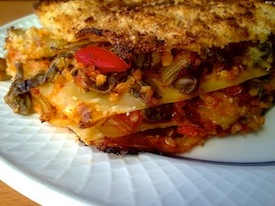 Vegetarian lasagna as a classic

Of course, Bulldogs offered salads such as salad with bulgur and orange, where Bruno used lollo rosso salad, and along with bulgur and orange, an important ingredient were cherry tomatoes and a mustard, honey and olive oil topping. But the most talked about vegetarian dish of the Bulldog Restaurant was vegetarian lasagna. Instead of pasta for lasagna, chef Bruno used a carrot carved on strips. Instead of minced meat, he used couscous, zucchini, chickpeas and Grana Padano cheese. In case Bulldog restaurant guest was a vegan, instead of cheese, tofu was used. What was used in both classic and vegetarian lasagna was tomato sauce, which ultimately resulted in delicacy for vegetarians/vegans. After all, all these dishes are so delicious that you don't need to be vegetarian or vegan to order and enjoy them at the Bulldog Restaurant.